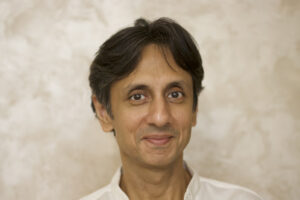 Born and brought up in Mumbai, Gautam faced one challenge after another fairly early in life. He remarks, “As a result, I grew up before my time.” Having to cope with the loss of his father at the young age of 14 gave rise to questions related to death, insecurity, and survival, which would affect most children faced with a similar loss.

Gautam’s fondest memories are of the times spent with his parents on weekend trips to the shrine of Sai Baba at Shirdi, and on annual holidays when the family went to Kashmir. His father had built a prospering advertising business, which after his father’s demise, had continued to grow and progress under the watchful eye of his mother. Gautam started attending office while he was still in college and, three years later, took over the reins of the business.

Running the business and dealing with a staff of thirty who were all much older than him taught him about building relationships with people – whether they were CEOs of multi-national corporations, suppliers, or his colleagues at work. Gradually, he was able to bring the company out of the red – bad debts that had been incurred over the years – and back into the black.

At the turn of the millennium (December 1999), Gautam’s inherent but latent spiritual inclination surfaced through a series of synchronistic events. Following his mother’s example, he started attending a course in Brahma Vidya (Knowledge of Brahman) based on a system of ancient Tibetan breathing exercises. This course was conducted by his mother’s guru, Justice Dudhat of the High Court of Mumbai.

Around this time, Gautam diversified into publishing by setting up Yogi Impressions, primarily to publish his mother Santosh’s book on her spiritual awakening. Santosh Ma’s journey of awakening spanned three years, from 1996 to 1999. Although there was no desire or ambition to publish any other book besides this one, destiny had charted a new course for him, as he was soon to discover.

As a single parent, Santosh played the role of both mother and father during Gautam’s as well as his sisters’ growing up years. This role took on another dimension after her spiritual awakening when aspirants started visiting her for guidance on the path of Kundalini and meditation. By now, Gautam was closely working with her on other books that were to follow as well as witnessing, at close quarters, her interactions with aspirants. He imbibed a lot by just being in her presence. He is often asked what it is like to live under the same roof with a personality such as his mother. His sister Shibani sums it up by saying, “Never once did our mother utter the word ‘No’ to us.”

In November 1999, Gautam met Eckhart Tolle, the best-selling spiritual author of The Power of Now, in Hong Kong, while holidaying with his sister Nikki who worked there at the time. He had several interactions with this spiritual teacher over the next few years, courtesy of Nikki and her friends’ proximity to Eckhart, which led to his publishing company bringing out the Indian edition of The Power of Now. Eckhart had said that publishing would be the start of ‘an adventure’ for Gautam, and so it turned out to be.

It was at Nikki’s urging that Gautam met the Advaita sage, Ramesh Balsekar, in February 2000. Some of her friends were flying down from a distant country just to meet this modern sage who lived a mere 20-minute drive away from Gautam’s home. Having no conscious interest in the subject, he tagged along one Sunday morning to Ramesh’s residence in Mumbai. On his next visit when Ramesh saw him, he asked Gautam: “Isn’t this the second consecutive Sunday you have come? Be careful young man… this will become your Sunday church!” Little then did he know that he would keep visiting Ramesh over the next nine years to attend his satsangs.

In hindsight, Gautam says that these three events: the culmination of his mother’s awakening, meeting Eckhart Tolle as well as Ramesh Balsekar, all in a span of a few months between November 1999 and February 2000, were to shape the course of his life’s journey thereon. As he was not familiar with their teachings at the time and was graced by directly being in their presence, he refers to this period as ‘being introduced to the presence of Presence.’

Ramesh’s teaching was a validation of Gautam’s life experiences. It became evident that Ramesh was more than a friend, philosopher, father-figure, and mentor – he was the Guru he had been unconsciously seeking. Sitting with Ramesh, Gautam says he got answers ‘to questions he never asked’. This was reflected in Ramesh’s words (from the Foreword to Gautam’s second book The Buddha’s Sword, based on Ramesh’s teaching): “During the early years when Gautam visited me every Sunday morning, I noticed the keen interest he showed in the subject and I soon came to the conclusion that ‘awakening’ had taken place, and that he was on his way to ‘deliverance’ – awakening functioning in daily living.”

During these years, Gautam worked closely with Ramesh assisting him with the editing and publishing of some of his books. In later years, Ramesh encouraged Gautam to write especially after reading an article Gautam had written for India’s leading spiritual magazine on the occasion of Ramesh’s 90th birthday in 2007. It was this gentle nudge that eventually led to Gautam writing his first book based on Ramesh’s teaching – Pointers from Ramesh Balsekar.

Since then, Gautam has authored five more books. He is quite perplexed himself at this ‘happening’ as he had no intention of becoming a writer. “At least one doesn’t have to look hard for a publisher,” he adds with a smile. His books have been translated into Russian, German, Spanish, Hindi, and Marathi.

Gautam has an active work-life that includes overseeing the publishing business. He lives and works in South Mumbai. Depending on Gautam’s schedule, meetings take place on some Sunday mornings at his residence in South Mumbai. Talks are being regularly live-streamed on Zoom as well as YouTube.

Some of the points discussed in this interview.