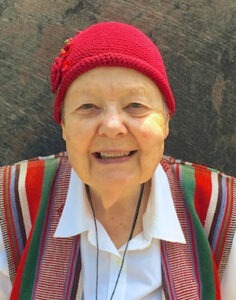 Dorothy Walters, Ph.D., spent most of her early professional life as a professor of English literature in various Midwestern universities. She helped to found one of the first women’s studies programs in this country and served as the director of this program for many years. After an extended residence in San Francisco, she now lives and writes in Colorado, where she has a close relationship with the mountains as well as various streams and canyons.

She underwent major Kundalini awakening in 1981 (a phenomenon totally unfamiliar to her as well as to most of her contemporaries at the time); since then she has devoted her life to researching and writing about this subject and to witnessing the unfolding of this process within herself as well as assisting others on a similar path through writing and other means. As someone who made her extensive journey without the direction of any external leader or guru, church, or established order, she is a strong believer in the “guru within,” the inner guide rather than the external authority figure or institution.

She feels that universal Kundalini awakening is the means for planetary and personal evolution of consciousness, and that evidence of planetary initiation is becoming more and more prevalent. Her Kundalini awakening and subsequent process of unfolding are described in her memoir Unmasking the Rose, A Record of a Kundalini Initiation.  Her poems taken from her four previous volumes are published as “Some Kiss We Want: Poems Selected and New

”. Her article on “Kundalini and the Mystic Path” was included in Kundalini Rising, an anthology from Sounds True Publications. Her poems, which have been included in many anthologies and journals, have been set to music and sung at the Royal Opera House in London as well as Harvard University, used as texts for sermons and read aloud in churches, included in doctoral projects, been frequently quoted, and have given inspiration to many.  Recently, a pilgrim to Petra read one of her poems aloud while there.

She often gives counsel and referral free of charge to those undergoing spontaneous Kundalini awakening and/or spiritual transformation.