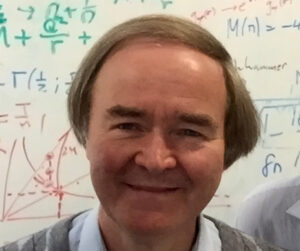 Bernard Carr is Emeritus Professor of Mathematics and Astronomy at Queen Mary University of London. As an undergraduate, he read mathematics at Cambridge University and for his Ph.D. he studied the first second of the Universe, working under Stephen Hawking. He was elected to a Fellowship at Trinity College, Cambridge, in 1975, and in 1980 spent a year traveling around America as a Lindemann Fellow before taking up a Senior Research Fellowship at the Institute of Astronomy in Cambridge. In 1984 he was awarded the Adams Prize, one of the UK’s most prestigious mathematical awards. In 1985 he moved to Queen Mary and he became a Professor there in 1995. He has also held Visiting Professorships at various institutes in America, Canada, and Japan. His professional area of research is cosmology and astrophysics and includes such topics as the early universe, black holes, dark matter, and the anthropic principle. He is the author of around 300 papers and the books Universe or Multiverse? and Quantum Black Holes. He is also very interested in the role of consciousness as a fundamental rather than incidental feature of the Universe. In particular, he is developing a new psychophysical paradigm linking matter and mind which accommodates normal, paranormal, and mystical experiences. He also has a long-standing interest in the relationship between science and religion, especially Buddhism, having been the coholder of a grant from the Templeton Foundation for a project entitled “Fundamental Physics, Cosmology and the Problem of our Existence”. He is President of The Scientific and Medical Network and a former President of the Society for Psychical Research.