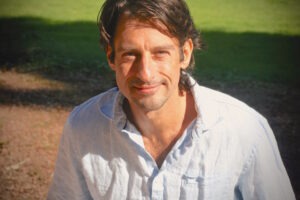 Here I am, Roger.

From an early age I recall a natural inquisitiveness towards the nature and mechanics of all sorts of things. I was constantly observing and theorizing.

Fortunately, throughout life, the denser and more persistent forms of suffering were not something I was particularly familiar with. Life unfolded quite smoothly on an inner and outer level.

Although there was already a strong spiritual bent, it wasn’t until my late twenties that life introduced the notion of enlightenment and the underlying non-dual nature of life. When this happened all the cells in my body shouted ‘yes’ and there was an unexplainable faith that trusted what had been read. From that point, everything else faded into insignificance next to the quest that had been ignited.

This was the beginning of a wonderful phase which spontaneously started some 15 years back and spanning 5 years miraculously didn’t stop until what was initially pointed at became lived on an unwavering basis.

IT WAS ALL JUST HAPPENING

This notion immediately resonated deeply and in a short time the ingrained contrary beliefs dissolved and the conviction flowered into an experiential way of being that so perfectly embodied this pointer.

This magically intricate process unfolded with this heart attitude present throughout, making it known directly to be a divinely orchestrated plan delivering everything that was needed in exactly the right proportions and at exactly the right time. I have been known to say “that if any of this process was actually up to ‘me’, I would have messed it up on day one!”. And yet the paradox, but not contradiction, is that it was Roger who was the one contemplating, reading, meditating and so forth.

From then I had a deep experiential conviction that everything in life happens the same way “according to God’s Will” from the beginning of time to the end of time. This deepened and led to a radical insight about the nature of Source in its most primordial. From here the underlying oneness of life became obvious far more than just intellectually and an unbroken connection to Source was established from where peace of heart in daily living stems.

I hold Satsang and retreats and welcome anyone to join in the spiritual discourses, especially if there is a genuine yearning to open to the notion, and ultimately the first hand, direct knowing, that unbroken peace of mind, love and contentment are our very nature and not caused by things we need to do or attain. This is everyone’s birthright.

The following saying penetrates to the core of what this particular teaching addresses, and that is the marriage of two seemingly contradictory standpoints into a unified paradoxical realization of ‘non-dual duality’ which leads to liberation.

I always speak from my own direct experience, however many who knew the great teachings of my beloved Guru Sri Ramesh Balsekar will recognize the content often comes through in much the same vein as what he shared with seekers for more than 25 years in Mumbai, India. Jai Ramesh Guru. The teachings of Jesus, A Course in Miracles, Sri Nisargadatta Maharaj and Bhagwan Sri Ramana Maharshi, among others, were all precious gifts which were instrumental in what happened. Humbled and in gratitude I bow.