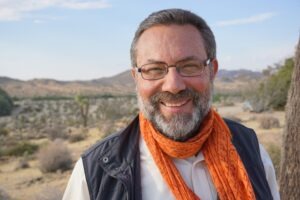 Professor Paul Muller-Ortega, Ph.D., is recognized internationally as one of the world’s most highly respected and renowned academic scholars in the field of Indian Religion and Hindu Tantra. He is the founder of Blue Throat Yoga, which teaches the elegant Svatantra philosophy of Kashmir Shaivism, along with the practice of Neelakantha Meditation.

For nearly fifty years, Paul has been a pioneer in the technology of Consciousness, lecturing and teaching about meditation and Indian philosophy to hundreds of thousands of people in North and South America, Europe, and India. Through his books, articles, essays, commentaries, and translations, Paul has earned a reputation for his unparalleled scholarly authenticity and for being a charismatic teacher with a remarkable capacity to convey esoteric truths and teachings. Paul’s teachings are highly accessible, relevant, and comprehensible to the Western mind.

Paul Muller-Ortega is the author of the highly acclaimed book, The Triadic Heart of Siva: Kaula Tantricism of Abhinavagupta in the Non-Dual Shaivism of Kashmir (Suny Series, Shaiva Traditions of Kashmir)

, in which he examines the “Heart” as the mystical core of Consciousness. He is also one of the co-authors of “Meditation Revolution”, as well as numerous scholarly articles on aspects of Tantric Studies.

Professor Paul Muller-Ortega earned his undergraduate degree in Philosophy from Yale University in 1971. He received his Ph.D. in Religious Studies from the University of California, where he studied Sanskrit, Indian Religions, and Asian Philosophy and Culture. For twenty-five years he was a Professor of Religion at Michigan State and then the University of Rochester, and was known for his passionate and innovative teaching style and enrolled-to-capacity classes.

Paul has been a meditation practitioner and teacher for nearly fifty years. He has formally studied with several of the greatest meditation masters of our time, and subsequently has organized and taught hundreds of meditation seminars, disseminating potent practices of meditation to thousands of individuals. With this rare combination of training, experience, skill, spiritual practice, and profound insight, Paul teaches his students to abide in the heart of Consciousness: a journey that is inspiring, life-changing and enlightening.