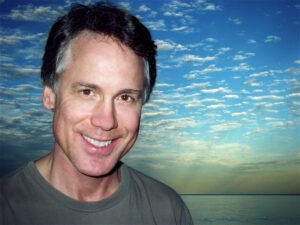 Rev. Michael Dowd is a bestselling evolutionary theologian and pro-future evangelist whose work has been featured in The New York Times, LA Times, The Wall Street Journal, Washington Post, Newsweek, Discover, and on television nationally.  His bridge-building book, Thank God for Evolution, was endorsed by 6 Nobel Prize-winning scientists, noted skeptics, and religious leaders across the spectrum. Michael and his science-writer wife, Connie Barlow, have spoken to more than two thousand groups across North America since 2002.

Michael has delivered two TEDx talks and a program at the United Nations. In 2010 he interviewed 38 Christian leaders across the theological spectrum, all of whom embrace an ecological, evolutionary worldview and are committed to a healthy future, as part of a series, titled, “The Advent of Evolutionary Christianity.” Most recently, he interviewed 55 experts on climate change, peak oil, and sustainability, as part of an online conversation series, titled, The Future Is Calling Us to Greatness.

Dowd’s passion for proclaiming a pro-science message of inspiration — what he calls “the Gospel of Right Relationship to Reality” — has earned him the moniker ‘Reverend Reality’ as he speaks prophetically in secular and religious settings alike about the generational evil of anti-future / anti-Christian policies and the necessity of co-creating a just, healthy, and sustainably life-giving future for humanity and the larger body of life.

Key quote:  “God is reality with a personality, not a person outside reality. If you don’t get personification, you can’t possibly understand the world’s myths and religions — and you’ll surely miss what God is telling us today through scientific evidence.  Few things matter more than this in a world of ecological degradation and climate chaos.  Anyone who doubts this need only watch one or two of the Hollywood star-studded ”Nature Is Speaking” videos that have gone viral in recent months.” ~ Rev. Michael Dowd

Michael’s wife Connie Barlow split this video into two segments, edited it a bit, and added text and graphical annotations. In this first segment, Michael Dowd speaks of his “pro-future” distinctions in the context of broad concerns as well as the metaphysical/Buddhist worldview set forth in questions posed by Rick Archer, host of the “Buddha at the Gas Pump” conversation series (extracts of which have been re-shaped into this video).

In this second segment, Michael Dowd speaks of his “pro-future” distinctions derived from ecological sciences. Rick Archer, host of the “Buddha at the Gas Pump” conversation series, poses questions of broad interest as well as topics central to Buddhist and metaphysical worldviews.