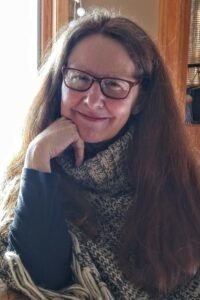 Mari Perron tells us she’s delighted that A Course of Love has granted her a voice in the new dialogue that has opened about who we are as human and divine beings. She feels that the wisdom of the heart—a major focus of A Course of Love—has at times been missing from the conversation, and loves being able to speak for both the heart and the “human.” A question asked within A Course of Love is this: Doesn’t it make sense that the only error possible is that of not being who you are?

Within A Course of Love, which Mari received between 1998 and 2001, Jesus calls Mari its “first” receiver and says that each person who lets it enter their heart is a receiver as well. Its stated purpose is a return to a true identity that existed prior to the time of learning, and it calls for learning to end.

Mari feels that in a world that has told us everything we need to know can be known with our minds and/or learned from teachers, experts and gurus, we’ve often felt discouraged from listening to our hearts or trusting our inner knowing. A Course of Love offers a new way of knowing and invites us to enter dialogue and become creators of the new.

Originally published as three separate books, A Course of Love has now been combined into one volume, which includes The Course, The Treatises, and The Dialogues. Since this new publication a few years ago, it has found acceptance with many in the ACIM community, and, like A Course in Miracles, begun to inspire people around the world.

Mari lives in St. Paul, Minnesota where she is a writer and contemplative as well as an engaged mother and grandmother.