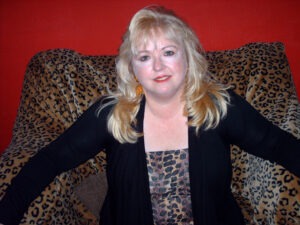 As an independent scholar, speaker, radio show host, published author, sacred tour leader and social justice activist, Karen’s work for three decades has been inspired by her interests and passion for travel, comparative religions, ancient cultures, women’s her story and the resurging interest in the rise of the Feminine Consciousness. Her work combines feminism, spirituality, and uplifting women, all of which are highlighted in her projects.

Her first book, Sacred Places of Goddess: 108 Destinations has garnered prestigious endorsements, while her second book, Walking An Ancient Path: Rebirthing Goddess on Planet Earth, was a finalist in the National Best Books of 2008 Awards. Her newest book, Goddess Calling: Inspirational Messages & Meditations of Sacred Feminine Liberation Thealogy, out in the Spring of 2014 is already getting rave reviews from her mentors and peers. Her fourth book, the anthology Voices of the Sacred Feminine: Conversations to Re-Shape Our World

, includes the wisdom of noted visionaries and scholars who she has interviewed.

Karen’s work has been highlighted in the Los Angeles Times, Seattle Times and other major newspapers. She is interviewed regularly by the media and has hosted her own internet radio show for the last nine years, Voices of the Sacred Feminine Radio, considered a treasure trove of insight and wisdom for our time. Her work has segued into writing, producing and consulting on projects which bring the ideals and awareness of the Sacred Feminine into the mainstream world through television and film. She can be seen in the new documentary, Femme: Women Healing the World, produced by Wonderland Entertainment and actress, Sharon Stone.

Her web radio show: Voices of the Sacred Feminine Radio.

Karen’s books can be ordered from on-line sellers including Amazon but if you prefer not to support multi-national corporations and ultra-conservative causes, order the book from a local bookseller or directly from the author using her website if you are in the U.S.