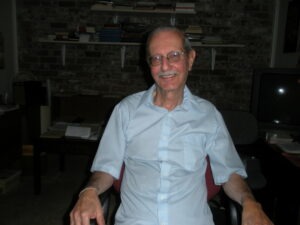 Am a Zoroastrian by birth but a theosophist by inclination; was educated in South India as a civil engineer and worked in Pakistan from 1950.

I learned TM in 1974 from an American teacher who introduced it for the first time in the country. Realizing its great value, I traveled to Switzerland in early 1975 and graduated as a teacher of TM under the guidance of Maharishi Mahesh Yogi who had popularized its practice in the West.

As the only teacher in Pakistan initially, I organized the TM Movement there and was its National Leader for 12 years until my wife and I left in 1987 to settle in the US. Several thousand were taught during this period.

In 1981, at Maharishi’s invitation, I visited India and graduated as a TM-Sidhi teacher at his ashram in Rishikesh.

Have been a member of the Theosophical Society for 44 years and am at present the president of the Houston Lodge, which is 98 years old. The motto of the Society is “There is no religion higher than Truth”, to which all seekers would subscribe.