I Am
Soft Bones Lit with a Misty Diffused Light,
Surrounded and Penetrated with
Essence,
Isness,
The All.
I Am
That Still Point,
Between Illusion and Light.
From this Place, I See the Space of Emptiness
Here Inside
That I Have Made by My Dying,
Ready to receive this vision
of Galaxies
Universes
End on End
Spinning Around the Center of Me
Absolute Stillness
From Which Is Sucked in and Spit Out,
All That Ever Was and All That Ever Will Be.
I Am That,
You Are That.
We Are
One

Paradoxically, “Anatta”, HWL Poonja, enlightened master, said, “means, I don’t exist.” Exactly! That was Anatta’s experience late one night almost 20 years ago when the ego/personality disappeared and was seen to have less reality than smoke and dust.

Yet a magical life has transpired, regardless. Starting out as a ‘Jesus Freak’ in New York, Anatta lived in Oregon and India as a disciple of Bhagwan Shree Rajneesh. In the presence of HWL Poonja she washed the Master’s dishes, ate radishes from his hands and massaged his arm which had been injured. She spent a beautiful afternoon sitting under the trees in Ojai California attending a talk with the late J. Krishnamurt. All in all, Anatta eventually traveled to India on seven separate occasions.

Continuing the journey in the west to Hawaii and Sedona, she sat with many well known teachers – finally finding her heart’s home back in the town of Tiruvannamali, India, and has felt blessed sitting at the foot of her ultimate teacher, the sacred mountain, Arunachala, near the Ramana Maharshi ashram; a place where, since ancient times, many enlightened beings have been drawn

When not in India, Anatta lived a very ordinary life in Southern California near her three daughters and three grandchildren.  Surprisingly existence has sent her two more teenagers to raise and she is currently in the mountains of North Carolina doing just that, though that journey is coming to an end as the “kids” are almost grown.

The Ordinary Life and Deepening into the Divine still go on and on, where they join into one blessed existence….. 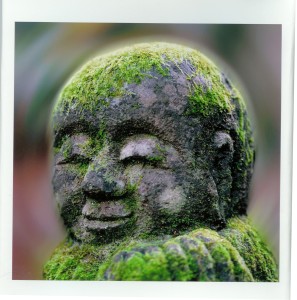 About the book, The Ordinary Buddha, by Anatta Campbell

A wonderful “secret” is revealed in these pages —that ordinary people are coming to the Highest Spiritual Experience from all variety of backgrounds. Enlightenment is possible here and now for each individual, absolutely regardless of background or training.

A huge momentum is happening, a universal movement toward “waking up.” Unlike in ancient times, now it is happening, to you and me, and the guy down the street. No particular path or religion is responsible for it.

Adyashanti and Byron Katie, two well known teachers, share their personal awakening stories, as well as eleven other “ordinary” people who, in beautiful and dramatic ways, share with us their journey from real-life, not so saintly pasts to the discovery of their true nature; The discovery that we are not who we thought ourselves to be all along, but something far more grand and yet sweetly ordinary.       The Knowing sweeps through us like a fresh breeze on a spring morning. Their discovery is our discovery.

The Enlightened ones say there is not the slightest breath of separation. The message is, You Are That.