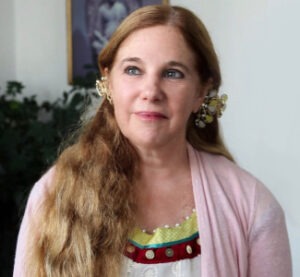 Dena Merriam has been working in the interfaith field for 20 years and founded the Global Peace Initiative of Women (GPIW) in 2002. Initially, the organization was designed to provide a global platform for women spiritual leaders to organize and mediate dialogues in areas of conflict and tension. This soon expanded to include an equal number of men and women spiritual teachers and to deal with a range of issues, including climate change, ecological destruction, racial inequity, etc. The premise for the gatherings organized by GPIW is that at the heart of all these issues is a spiritual crisis and the way to address them is a shift in consciousness. Dena has served on the boards of the Harvard University Center for World Religions, the International Center for Religion and Diplomacy, Dharma Drum Mountain Buddhist Association, among others. In 2014 she was awarded the Niwano Peace Prize. Over the years as memories of past births have arisen, Dena has recorded them in order to better understand the karmic patterns. She has now shared her memories in My Journey Through Time: A Spiritual Memoir of Life, Death, and Rebirth, in the hope that others will gain insight into their own lives through this sharing.