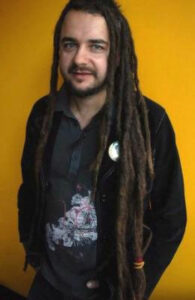 Adam Bucko is an activist, spiritual director to many of New York City’s homeless youth, and co-author of a new award-winning book called “Occupy Spirituality: A Radical Vision for a New Generation (Sacred Activism)

He grew up in Poland during the totalitarian regime and spent his early years exploring the anarchist youth movement as a force for social and political change. At the age of 17, Adam immigrated to America where his desire to find his path towards a meaningful life led him to monasteries in the US and India. His life-defining experience took place in India, where on his way to a Himalayan hermitage, he met a homeless child who lived on the streets of Delhi. This brief encounter led him to the “Ashram of the Poor” where he began his work with homeless youth. After returning to the US, he worked on the streets of various American cities with young people struggling against homelessness and prostitution. He eventually co-founded The Reciprocity Foundation, an award-winning nonprofit dedicated to transforming the lives of New York City’s homeless youth.

In addition to his work with homeless youth, Adam established HAB, an ecumenical and inter-spiritual “new monastic” fellowship for young people which offers formation in radical spirituality and sacred activism.

He collaborates with spiritual leaders across religious traditions and mentors young people, helping them discover a spiritual life in the 21st century and how to live deeply from the heart in service of compassion and justice.

Interview recorded 10/23/2015 at the Science and Nonduality Conference.