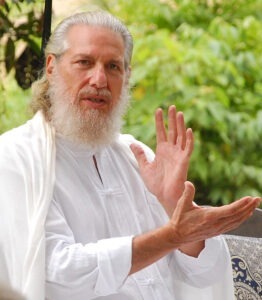 Shunyamurti is the founder of the Sat Yoga Ashram, located in the misty mountains of southern Costa Rica. The ashram includes a wisdom school (Sat Yoga Institute), a research and teaching division on creating self-sustaining spiritual communities (Premaculture), a new approach to healing and transformation (Atmanology), and a meditative retreat center open to people from all over the world. Its mission is to accelerate the transfiguration of human consciousness and contribute to the spiritual renaissance that is fermenting now on our planet.

Shunya became aware of yoga at an early age and was immediately drawn to it. He also wrote poetry, which became a meditative process of discovering from where words and thoughts arose in consciousness. He studied many forms of yoga, including classical Ashtanga Yoga (guided by Baba Hari Dass), spent ten years in a formal Raja Yoga monastic order, as well as intense practice of Buddhist and Taoist yoga, Kashmir Shaivite tantra, Sufi and Christian contemplative prayer, and Kabbalah. He integrated quantum physics, systems and complexity theory, and the non-physical dimension of martial arts into his approach. He underwent initiation into shamanism, including the use of entheogens. Shunya has practiced law, was an investigative journalist and foreign correspondent, a political scientist, earned degrees in philosophy, drama, and psychology, practiced hypnotherapy (and all its permutations, including past life regression), Jungian dreamwork and Lacanian psychoanalysis.

Shunyamurti’s life-long quest for truth and the power of healing and transformation has brought about a deep understanding of the structure and dynamics of the ego, the latent capacities of the soul, and the radiant healing power of the Supreme Real, the One Self. He now functions as spiritual guide, retreat leader, and yogic research director of the Sat Yoga Ashram.