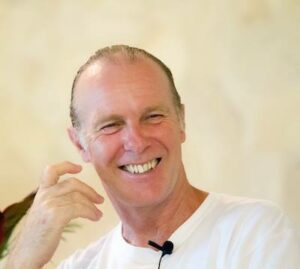 Bernie Prior, known as B, is an awakened contemporary teacher whose life is utterly devoted to the awakening of humanity.

Born in 1954 in England, his childhood and teenage years were marked by profound mystical experiences.   At age nineteen he awakened in the realization of One-ness and at thirty-three he awoke in the Absolute. Within this unfolding, he was graced with the rare and profound realization of the Bhagavati, the Divine Feminine Principle. During the period of these realizations, B led the life of a successful display artist in London. After enlightenment, his known life up to that point was entirely shattered.

B’s teaching crosses the range of human and universal experience. With deep compassion, humor and uncompromising truth B points the way to awakening to one’s real nature and destiny; to evolve from the misidentification with a separate-sensed self to fully embodying Life AS Living Awareness.

He speaks powerfully, uniquely and very practically of the divine nature of the Masculine and Feminine and of the potential for that Divinity to be known and lived directly between man and woman. True partnership is revealed as a sacred evolutionary path to Self- Realization; that is a profound calling to bring the Divine Union from which the dance of Duality springs into the very sphere of our relating to each other and to all of Life. It is the direct and immediate participation as Awareness in the ongoing evolution of Consciousness and its forms.

B is the Originator of The Form – Reality Practice™, a movement practice for the evolution of consciousness to manifest Great Love on Earth. The movement awakens the practitioner to the truth of the formless nature of all forms and integrates that as an ever-growing, conscious way of deepening Being. The very movement of one’s life becomes an expression of Source through Greater Reality landing in the heart, the body and the self.

The Form is practiced and taught worldwide by B and Accredited Teachers as a pure and powerful Way of Belonging, transformation and self-mastery. B is based in New Zealand and travels extensively holding talks and residential retreats around the globe.