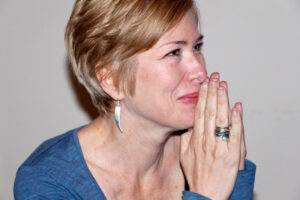 Alaya first experienced brief glimpses leading to a spontaneous awakening in 1997. This left her with a burning fire for truth and a determination to find a release from her suffering. She was drawn to satsang and to the feet of her beloved Neelam: a teacher of the Ramana Maharshi lineage. From that very first meeting there arose a profound recognition of unconditional love but also a strong sense of separation and resistance. However, Alaya instinctively knew that penetrating the resistance was exactly what was needed to penetrate the suffering. With Neelam’s unconditional love this separation fell away shortly after the birth of Alaya’s first child in 2001.

With a new husband and baby, Alaya moved to Asheville. She found in her daily experience of being a householder and working mother, that there was much abiding awareness/living in present Reality. But the non-abiding dream state kept arising which created an even deeper desire to investigate what was still appearing as separation. She realized that what was needed was already in the life she was leading and that every moment was a gift and opportunity to return to the natural awakened Self. “My husband, my children, my job, everything is my teacher, and true love is laying down whatever pulls on you, turning back to this life with an open heart and open palms.” With the realization that ordinary everyday life was sacred and that each moment was the Beloved pointing us home, she continued to question and inquire into her ideas, perspectives, and feelings until the veil of separation finally fell away. “With tenderness and openness, conditioning can unmanifest – leaving what naturally remains, as stillness, presence and love.” As people began to ask her to teach, Grace appeared as the non-dual teacher Adyashanti and with his support and friendship she began to give satsang in 2011. “Grace is like gravity, it will continue to pull you within for the truth of who you are isn’t found in doing. It is found in the silence – in stillness.”