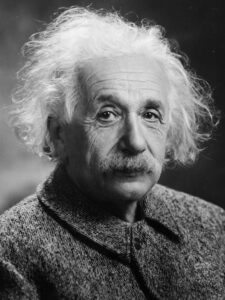 “Compassionate people are geniuses in the art of living, more necessary to the dignity, security, and joy of humanity than the discoverers of knowledge “.

“Contemplate the mystery of conscious life perpetuating itself through all eternity, to reflect upon the marvelous structure of the universe which we can dimly perceive, and try humbly to comprehend even an infinitesimal part of the intelligence manifested in nature.”

“Your question is the most difficult in the world. It is not a question I can answer simply with yes or no. I am not an Atheist. I do not know if I can define myself as a Pantheist. The problem involved is too vast for our limited minds. May I not reply with a parable? The human mind, no matter how highly trained, cannot grasp the universe. We are in the position of a little child, entering a huge library whose walls are covered to the ceiling with books in many different tongues. The child knows that someone must have written those books. It does not know who or how. It does not understand the languages in which they are written. The child notes a definite plan in the arrangement of the books, a mysterious order, which it does not comprehend, but only dimly suspects. That, it seems to me, is the attitude of the human mind, even the greatest and most cultured, toward God. We see a universe marvelously arranged, obeying certain laws, but we understand the laws only dimly. Our limited minds cannot grasp the mysterious force that sways the constellations.”

Albert Einstein was quoted in The New York Times, November 9, 1930, saying: “I assert that the cosmic religious experience is the strongest and noblest driving force behind scientific research.”

As recorded by Helen Dukas in Albert Einstein, The Human Side (Princeton University Press, 1981, p. 66), Einstein stated: “My religiosity consists in a humble admiration of the infinitely superior spirit that reveals itself in the little that we, with our weak and transitory understanding, can comprehend of reality. Morality is of the highest importance-but for us, not for God.”

Walter Isaacson quoted Einstein in the article “Einstein and Faith,” Time 169, April 5, 2007, 47): “The fanatical atheists…are like slaves who are still feeling the weight of their chains which they have thrown off after hard struggle. They are creatures who – in their grudge against the traditional ‘opium of the people’ – cannot bear the ‘music of the spheres’.”

According to Prince Hubertus (Ronald W. Clark, Einstein: The Life and Times, New York: World Publishing Company, 1971, p. 425), Einstein said: “In view of such harmony in the cosmos which I, with my limited human mind, am able to recognize, there are yet people who say there is no God. But what really makes me angry is that they quote me for the support of such views.”

Einstein wrote to M. Berkowitz, 1950, (William Hermanns, Einstein and the Poet. In Search of the Cosmic Man, Brookline Village MA: Branden Books, 1983, p. 60): “‘God’ is a mystery. But a comprehensible mystery. I have nothing but awe when I observe the laws of nature. There are not laws without a lawgiver, but how does this lawgiver look? Certainly not like a man magnified.”

“I think the most important question facing humanity is, ‘Is the universe a friendly place?’ This is the first and most basic question all people must answer for themselves.
“For if we decide that the universe is an unfriendly place, then we will use our technology, our scientific discoveries, and our natural resources to achieve safety and power by creating bigger walls to keep out the unfriendliness and bigger weapons to destroy all that which is unfriendly and I believe that we are getting to a place where technology is powerful enough that we may either completely isolate or destroy ourselves as well in this process.

“If we decide that the universe is neither friendly nor unfriendly and that God is essentially ‘playing dice with the universe’, then we are simply victims to the random toss of the dice and our lives have no real purpose or meaning.

“God does not play dice with the universe.”

“Reality is merely an illusion, albeit a very persistent one.”

“I am convinced that He (God) does not play dice.”

“Imagination is more important than knowledge. For knowledge is limited and imagination encircles the world.”

“Do not worry about your difficulties in Mathematics. I can assure you mine are still greater.”

“Science without religion is lame. Religion without science is blind.”

“Everyone must, from time to time, make a sacrifice on the altar of stupidity.”

“We’re all very ignorant, but we’re not all ignorant in the same things.”

“When I was young I found out that the big toe always ends up making a hole in a sock. So I stopped wearing socks.”

“We are architects of our own destiny.“

“What a sad era when it is easier to smash an atom than a prejudice.”

“My political ideal is democracy. Everyone should be respected as an individual, but no one idolized.”

“Memory is the intelligence of fools.”

“I have no special talent. I am only passionately curious.”

“The important thing is not to stop questioning. Curiosity has its own reason for existing.”

“Joy in looking and comprehending is nature’s most beautiful gift.”

“There are no great discoveries and advances, as long as there is an unhappy child on earth.”

“If you are out to describe the truth, leave elegance to the tailor.”

“Man finds God behind each door that science opens.”

“The value of a product can be found in its production.”

“Two things are infinite: the universe and human stupidity; and I’m not sure about the universe.”

“There is a driving force more powerful than steam, electricity, and atomic energy: the will.”

“Minds are like parachutes; they work best when open.”

“I didn’t arrive at my understanding of the fundamental laws of the universe through my rational mind.”

“Concerning matter, we have been all wrong. What we have called matter is energy, whose vibration has been so lowered as to be perceptible to the senses. Matter is spirit reduced to point of visibility. There is no matter.”

“Time and space are not conditions in which we live, but modes by which we think.

Physical concepts are free creations of the human mind, and are not, however it may seem, determined by the external world.”

“Time does not exist – we invented it. Time is what the clock says. The distinction between the past, present, and future is only a stubbornly persistent illusion.”

“I think 99 times and find nothing. I stop thinking, swim in silence, and the truth comes to me.”

“The intellect has little to do on the road to discovery. There comes a leap in consciousness, call it intuition or what you will, the solution comes to you and you don’t know how or why.”

“A human being experiences himself, his thoughts and feelings as something separated from the rest, a kind of optical delusion of consciousness. This delusion is a kind of prison for us, restricting us to our personal desires and to affection for a few persons nearest to us. Our task must be to free ourselves from this prison by widening our circle of compassion to embrace all living creatures and the whole of nature in its beauty.”

“Our separation from each other is an optical illusion.”

“When something vibrates, the electrons of the entire universe resonate with it. Everything is connected. The greatest tragedy of human existence is the illusion of separateness.”

“Reality is merely an illusion, albeit a very persistent one.”

“We are souls dressed up in sacred biochemical garments and our bodies are the instruments through which our souls play their music.”

“When you examine the lives of the most influential people who have ever walked among us, you discover one thread that winds through them all. They have been aligned first with their spiritual nature and only then with their physical selves.”

“The true value of a human being can be found in the degree to which he has attained liberation from the self.”

“The ancients knew something, which we seem to have forgotten.”

“The more I learn of physics, the more I am drawn to metaphysics.”

“One thing I have learned in a long life: that all our science, measured against reality, is primitive and childlike. We still do not know one-thousandth of one percent of what nature has revealed to us. It is entirely possible that behind the perception of our senses, worlds are hidden of which we are unaware.”

“I’m not an atheist. The problem involved is too vast for our limited minds. We are in the position of a little child entering a huge library filled with books in many languages. The child knows someone must have written those books.”

“The common idea that I am an atheist is based on a big mistake. Anyone who interprets my scientific theories this way did not understand them.”

“Everything is determined, every beginning and ending, by forces over which we have no control. It is determined for the insect, as well as for the star. Human beings, vegetables, or cosmic dust, we all dance to a mysterious tune, intoned in the distance by an invisible piper.”

“The religion of the future will be a cosmic religion. It will transcend a personal God and avoid dogma and theology.”

“Energy cannot be created or destroyed; it can only be changed from one form to another.”

“Everything is energy and that is all there is to it. Match the frequency of the reality you want and you cannot help but get that reality. It can be no other way. This is not philosophy. This is physics.”

“I am happy because I want nothing from anyone. I do not care about money. Decorations, titles, or distinctions mean nothing to me. I do not crave praise. I claim credit for nothing. A happy man is too satisfied with the present to dwell too much on the future.”