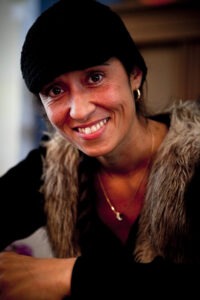 Aisha is a Woman in Truth. For more than 12 years, she has been cultivating and realizing in deep surrender, the Truth of Being across its different dimensions. Her dedication has brought her into realization of her Self as Universal Consciousness, beyond Existence into the Absolute and back into existence as the True Incarnation – as the Black Light of Being/the Black Mother.

Aisha (born March, 1979) was born and raised in a non religious family in Denmark.

At the age of 24 the question “Who am I?” rose in her mind with the demand for Truth. Due to complete surrender in Love of her Self as All, Life broke loose knocking down every illusion of individual existence through one and a half years of extreme spiritual unfoldment.

Her massively expanding consciousness sent her through daily trances, bodily burning, periods of bodily paralyzation etc. as Life demanded her to swallow the pill of purification – becoming pure Life itself. In the realization as Universal consciousness, the answer became clear. God is Love is Life is Me.

The return to living invited for integration through the solving of every puzzle Aisha had regarding human life and living. Being a single mother in service as a spiritual teacher, she touched upon every aspect of living; including man/woman, parenting, family, friends and nature – all was embedded in/as the One reality of Life, of Love itself.

After years of being in service as a spiritual teacher and by the fulfillment of all desired aspects of her human life and living, Aisha was (8 years after the initial rise of demand for Truth) called into solitude of retreat – out of every context. The calling into Silence invited for the passing beyond the final belief in Self – to realize Absolute Truth by emergence of- and solidification as Reality beyond consciousness; basic Space/pure Awareness.

For two years she was out of reach – merging only with the Void beyond existence. A deep cultivation which flipped the entirety of her Life/God-realization into Nothing/Truth-realization, by the implosion of Self into Space – from Love into Clarity by recognition of what is prior to God. It was a deep integration with and beyond the Head-space, which revealed pure Mind.

The reappearance of Life started happening as the emerging of the balance-point between the Light and the Darkness – Love and Clarity as One and the Same. Aisha once again started accepting invitations from abroad, once again traveling, sharing Truth with the planet.

***
Despite Aisha being a realized Being, her cultivation never Ends. The deeper cultivation of her three bodies of Being; her Action body, Truth body and Enjoyment body is in ever ongoing evolution.

The recent stages of Aisha’s evolution, has been revolving around the total integration into the human form with its deep cultivation of the True Human Qualities in a coming together of her Heart’s realization as pure Light and Mind’s realization as the Void, into the thick substance as Black Light, now incarnating deeply into the intimacy of the Earth, with integral individuality – as Truth in form.